Remembering this day 19 years ago… 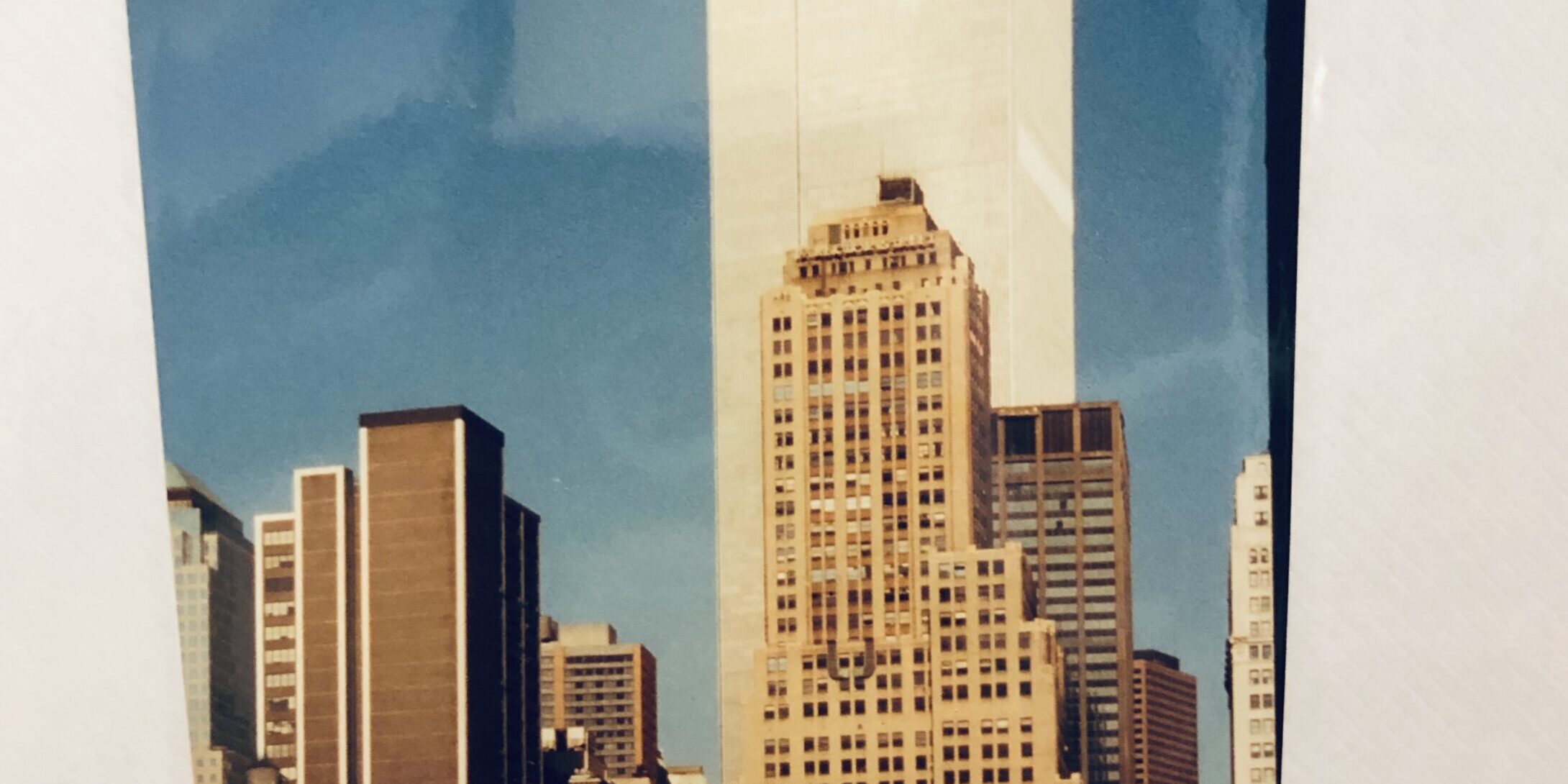 It took me a while to gather my thoughts on this 9/11 anniversary. That, and the fact that I picked up my son from college today.

Each year, my daughter asks me about that day and what it was like. For many years, I have told her how her dad and I went with our friend (who actually introduced us in college) to the viewing deck at the top of one of the towers just a few years before (December 1998). Today however, I decided to pull out the photo album and show her. As she looked at the photos that I took that day, she realized that no one can take quite the same photos from that place ever again. Poignant.

We also saw this photo below that I took that day in 1998. I never noticed before how ghostly the Twin Towers look standing majestically in the background against that beautiful, vibrant blue sky. It is what I came to call a 9/11 sky – that impossibly blue sky. It’s eerie to think of what was to come…

Today on our drive to my son’s college, we heard Alan Jackson’s “Where were you (when the world stopped turning)” on the radio and I turned it up so my daughter could listen to the lyrics. Alan does such a wonderful job of really expressing what it was like to live in America during that period of time. Listening to it actually brought tears to my eyes as I thought about what I did and how I felt back then.

On this day 19 years ago, it had been just a little over five months since our first-born daughter died of a heart defect in my arms. I spent the months after that in deep grief and walking around feeling like an alien as there were very, very few people (thankfully) who could truly understand the pain and anguish I was going through. I felt so different from others. But when the events of that day happened and the shock and grief spread around the country and around the world, I felt in some odd way that suddenly I was not such an alien. Now, many more people understood what I had been going through for the past five months after she had died.

At that time, we also were on the verge of attempting another round of IVF to try to have another child. As I stood in the shower on this night exactly 19 years ago, a little voice in my head wondered if I really wanted to bring more children into this crazy world. I decided that yes, I absolutely wanted to bring more children into this world. Then and there I vowed to do my very best (if was blessed with the responsibility and gift again), to try to raise children who would help to make this world a better place.

I wanted to drive up to NYC and volunteer in the “bucket brigade” the next day. But my parents, my husband and his parents practically forbid me to go. They pointed out that I wanted to try to get pregnant again very soon. Who knew what was in the smokey air around Ground Zero and how that could harm a future baby. So I listened to them. But only until that Saturday, four days later when I was off from work. I simply could not stay away. My co-worker and I drove up there just to … who knows what. But I just had to be with my beloved city. I had to.

As we walked the streets, it was as if everyone was in a daze. There was very little traffic. Few pedestrians and those who were there were walking slowly and not talking very much. There were no drivers running red lights or honking at other drivers. It was surreal, as if everything was in slow motion. The usual electricity of the city was simply not there. There was a thick, nauseating smell that hung in the air.

The real anguish hit me when we walked around a church on Lexington Avenue. I cannot even remember the name of it now, but the wrought iron fence all around the church was filled with posters of missing loved ones. We walked silently around the church looking at the posters. Most were of smiling people, wedding photos, beach trips, birthday parties. But the person was always smiling. The posters offered descriptions of what the person had been wearing on 9/11, what floor of which tower they worked on, what company they worked for. I felt deep sorrow, knowing that most likely each of those many, many people had perished that fateful day.

One poster in particular of a young man caught my attention and drew me in. For whatever reason, I read his poster a little longer than the others. Suddenly, his mother ran to me from out of nowhere with such a hopeful look on her face. Because I was lingering on the poster of her son, she thought I might have some information about his whereabouts. I could barely speak without tears to let her know that I did not in fact, know her son. I hugged her and cried with her as her hope turned again to anguish. It was gut-wrenching.

One other thing struck me about that Saturday and that whole period of time. On the drive up the New Jersey Turnpike several days after 9/11, nearly every overpass we drove under was covered in American Flags. I mean covered. We saw hundreds and hundreds of flags on that 90-minute trip.

There was such a spirit of patriotism pulsing through our country after 9/11. A spirit rising like a phoenix out of the hearts of Americans. We were ONE, joined together, against a common enemy: Terrorism. Though terrorism is pure evil, the spirit of togetherness I felt among so many Americans of all different walks of life was nothing short of uplifting and inspiring.

And here we are, 19 years later. What is different? What is the same?

Where do I begin?

Post 9/11, we are battling “enemies” on many fronts, from a global pandemic to deep, systemic racism with historical roots that reach back centuries. That’s not even to mention the current political climate or the actual climate. It feels as if we as a collective have forgotten what it feels like to come together as one. It now feels as if America is literally torn into two halves. Where once we stood united against a common enemy, now we stand divided against a broad range of them.

I certainly know who I hope wins this election. But regardless of who ultimately wins, what we as citizens of this country need to figure out on November 4 is how in the world we can join back together again. To sew our divisions and reach our hands out to someone whose views do not align with our own. To come to another with a true desire to understand them and why they feel or think the way they do. It is our only hope – our only direction forward out of the mess we are collectively in. Whoever wins this presidential election, almost exactly half of the country is going to be unhappy. The supporters of the losing candidate need to figure out how to move forward. And the supporters of, as well as the winning candidate himself, must figure out how to welcome the other half to the table.

We must figure out how we can return to having civil discussions instead of reducing other’s thoughts and opinions down to sound bytes. Which I see happening all of the time.

On that fateful day 19 years ago I asked myself if I really wanted to bring children into this world. I decided I wanted to. Now I am responsible. Actually, we are all responsible for figuring out how to repair the damage that has been done, how to come together again and how to make this world a better place for our children. I don’t have all the answers, but one thing I know for sure is that they deserve nothing less.

The Focus on Good Grades and High Achievement in School
June 15, 2017