The Profound Joy of Giving 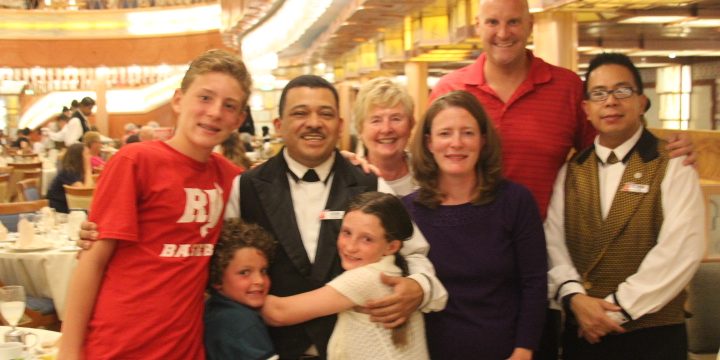 Our family just returned from a fabulous cruise to the Bahamas. It was 7 days of pure magic for all of us. I have a feeling I will be writing a few posts about our trip, but the first experience I want to share i…s one of giving. My husband and I have been on two prior cruises, and each time, I was deeply affected by how hard the ship’s crew worked. I remembered feeling uncomfortable with the paradox between how well the crew treats the passengers (you are made to feel like royalty) and how difficult their daily lives have to be in order to make that happen. Now that I have had 20 additional years of life experiences, I was prepared to feel that same discomfort this time, but also expected it to feel a little different now that I am a wife and a mother.

We had a wonderfully attentive, kind wait staff for our dinners, and we became very friendly with our head waiter, Selvin. One night after dinner, he told us his heart-breaking story of sacrifice and dedication. He is from Guatemala and he has a wife, a daughter (15), and two sons (11 and 4) back at home. He works six months on the ship and goes home for two months and then repeats that pattern. He works 12 hours a day, seven days a week without a day off for six months at a time. He has done this for the past 12 years in order to give his family a better life. I cannot fathom having to be away from the people I love the most for six months at a time, and to do that for my children’s entire childhoods. He did mention, however, that this particular ship would be dry-docked this October and that any crew who wanted to go home during that time would be allowed to. I asked him if he planned to go home and he told us that he would love to if he could save up enough money, but that he would have to wait and see.

One day about half-way through our trip, we could all tell that something was bothering Selvin. Even though we had only met this man a few days prior, we all felt as if we had known him forever. He is the kind of person who has a very sweet spirit and pure soul; you can just see the authenticity and genuine kindness in his eyes. On this particular night, he told us that he had just returned from home two weeks ago (from his two months off) and that he had called home earlier that day. His four-year-old son was having a rough day and he was crying for his daddy saying he wanted him to come home. Selvin could hardly speak while telling us this story, and I could hardly stand the thought of this dad and his little boy having to be apart for so long (5.5 more months). We happened to be pulling out of Port Canaveral in Florida at that very moment, so we still had use of our cell phones and the internet for a few more minutes before we went into what is considered international waters. I immediately knew what we had to do. As soon as he left our table, I frantically tried to get internet connection to find out how much round trip airfare would cost from Baltimore (where we departed) to Guatemala (where his family lives). I told my husband that we simply had to give him the cost of that airline ticket as an additional tip so that this kind, wonderful man who was missing his family could go home in October. My wonderful husband immediately agreed.

The rest of our trip was wonderful, and I certainly did not want to wish it away, but a part of me could not wait until the last night of the cruise when it is customary to tip the service people who have taken such great care of the guests. I told our three kids and my mother-in-law about our plan. All six of us were so excited to get to dinner that night. Earlier that afternoon, my daughter and I wrote letters to Selvin that we put in the envelope with the airfare money. My daughter could hardly contain herself when we arrived in the dining room that last night. My older son did not want to rush off after dinner to hang out with his “cruise” friends because he wanted to be there when we gave Selvin our surprise. At the end of the dinner, my daughter called him over. I got up and walked around to her side of the table. I put my hand on Selvin’s arm and looked into his eyes and told him how deeply touched we all had been by hearing his story of sacrifice and dedication and that we simply could not stand that he had to be away from his family for so long. At this point, my daughter could tell that I was starting to tear up, and instinctively handed me a napkin to wipe away the coming tears. I told Selvin, through very choked-up words, that we wanted him to be able to go home to his family in October and so we found out the cost of a round trip airline ticket to Guatemala and that was what was in the envelope that I handed to him. The look in his eyes was one I will never, ever forget and neither do I believe any of us will forget. He was overwhelmed and began sobbing and hugging us all, saying he could not wait to call his wife and tell her the wonderful news. He asked us for a picture so that he could show his wife the family who was making this possible. At that point most of us were crying. We were all deeply affected by this incredibly powerful moment.

I do not want to share this story to get praise for our action, but rather, to highlight the incredible power of giving. It would not have mattered if that plane ticket cost $10 or $1000. The point of it is that we were fortunate enough to be able to give something to this kind man that will allow him to reconnect with his loved ones. There is nothing better than the feeling we get when we give from our hearts.

We were all excited about this experience and talked about it long after the event. There were a few lessons that I wanted my children to take away from what we did.

First, there is kindness in the world, and our family is committed to spreading it as often as we can. When we see a need, if it is possible, it is our responsibility to try to fill it.

Second, we are all connected. Our cruise was a microcosm of the world in which we live. Just because the crew’s job is to wait on the passengers and be of service to them does not mean that they are any different or any “less” than the passengers. Whenever I saw a passenger drop trash on the floor and leave it there for the crew to clean up, I always picked it up and threw it away because even though it is their job to keep the ship clean, they were not our slaves. We as the passengers were perfectly capable of picking up our own trash, and it never felt right to me to leave it for them to do. Seeing the crew as my equals, I was careful to give them the same kindness and mutual respect that they gave to us. I tried to make sure my children understood that same concept.

Third, we are incredibly blessed. All during our vacation, I kept commenting to my children how amazing it was that we were so fortunate to be able to come on this beautiful ship, get this amazing service and see these Heavenly places on earth. I never want my children to take things for granted.

Life is to be savored, enjoyed and appreciated. I think we all did a pretty good job of that this time.

What WE Can DO To Stop These School Shootings
February 17, 2018

The Importance of Kindness to Yourself
July 22, 2015