Tips for Inspiring Greatness in our Young Athletes 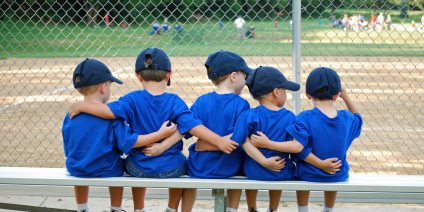 Another school year is ending and with it, another season of sports. Or is it? With today’s hard-driving emphasis on youth sports, seasons do not really “end” anymore, do they? For my children, their sports and activities have come to a close as of this weekend; no more “winter” swimming, no more dance performances, no more baseball. So I thought now would be a good time to reflect on the state of youth sports in our culture.

For many sports (soccer, basketball, baseball, swimming and football to name a few) the seasons almost go all year long, and many overlap each other, having kids playing and practicing for multiple sports at one time. And this is not just at the high school level. This can be seen with kids as young as seven years old. The first issue is the increased risk for repetitive motion injuries. Young kids’ bones and ligaments are still growing and doing the same exercises over and over is dangerous for them. The American Academy of Pediatrics says that up to 50% of all injuries seen in pediatric sports medicine are due to overuse injuries. But overuse injuries are just the tip of the iceberg.

The American Academy of Pediatrics also describes something called Overtraining Syndrome as a “series of psychological, physiologic, and hormonal changes that result in decreased sports performance.”6 Common manifestations may include chronic muscle or joint pain, personality changes, elevated resting heart rate, and decreased sports performance.6,7 The pediatric athlete may also have fatigue, lack of enthusiasm about practice or competition, or difficulty with successfully completing usual routines. Burnout should be recognized as a serious consequence of overtraining syndrome. Prevention of burnout should be addressed by encouraging the athlete to become well rounded and well versed in a variety of activities rather than 1 particular sport.” Burnout is a real issue. I have seen many extremely talented athletes walk away from a sport that they previously loved because they pushed (or were pushed) too hard and they no longer enjoy that sport.

With all of the sports I have observed over the course of this year (and previous years) I have seen all sorts of behaviors that are negative as well as positive. So how can we, as a nation and culture, inspire greatness in our young athletes? Consider the following:

1. Compliment rather than criticize. Far too often, I have seen coaches, but more often parents, berating their young son or daughter as soon as they can get to them after the child has messed up in a game or competition. I have seen solid, star athletes of all ages crack under the pressure of a highly competitive game. And every single time I have seen that, there has been a parent on the sidelines ready to rip into their child as soon as s/he comes off the field after his/her mistake. And I am not talking about just one sport. This happens over and over again. Can we, as parents, intentionally find something positive to say to our sons and daughters after the game? Surely we can find something good on which to focus about how they performed.

2. Encourage. Something I was taught by a very good coach long ago was to ask my child after a game, race, or competition if they had fun and enjoyed themselves, because they are much more likely to want to continue participating in things that they enjoy. And they are less likely to over-stress themselves about the next competition if they recognize they are doing something they love.

3. “I love to watch you play.” Thanks to Rachel Macy Stafford for this pearl of wisdom. When was the last time you said nothing about how your son or daughter played, and instead told them how much you love to watch them play? This statement goes a long way. My children’s eyes light up each and every time I tell them that. And it really is true. I do not care if they win or lose. My biggest thrill comes from watching them participate in things that they love. Truly. And hopefully along the way, if they are enjoying what they are doing and feeling good about themselves when they participate, they will be more relaxed and their skills will improve along the way. And if not, then that sport probably is not the best sport for them. But sooner or later, our children will figure that out. That decision is not ours to make – it is not our job as parents to push them to excel at sports. It is far better in the long run to take their lead and support them to go as hard or as far as they want to go. Or not. That being said, my 7-year-old’s team won their baseball championship game yesterday. He was not the best player by far on the team. In fact, he is closer to the worst player than the best. But that does not really matter. Every practice and every game, my little guy went out there and worked hard. He focused well and did everything his coaches asked him to do. So even though he did not hit a home run (like many of the other boys), I am still proud of him (for his hard work and determination – which are important life skills) and he knows that deep inside. And in reality, what I am happier about this weekend with him is not that his team won the baseball championship. I am much, much happier about the fact that my little first-grader successfully read his first Magic Tree House chapter book by himself in two days. Now that it something to celebrate and something that will take him far in his life.

4. Teach good sportsmanship by modeling it. Boy, did I see a lot of poor sportsmanship from parents this season. I saw it from parents whose children’s teams were winning and from parents’ whose children’s teams were losing. If our children are winning let us not gloat about their victory, causing the kids on the losing team to feel more rotten than they already do. And if our children are losing, let us not find excuses as to why the team lost. Let us just help our children to win graciously as well as lose graciously. Because they will “win” and “lose” at many things beyond sports over the course of their lives. Learning how to come through situations with grace and dignity is a precious gift to give our children and it all starts with how they see us conducting ourselves.

5. Inspire greatness not just on the field, but in life. This is where the rubber meets the road. My older son had a basketball coach this winter who my husband and I instantly agreed is the best volunteer parent coach we have ever seen across all ages and sports. He is fantastic. (We love you, Coach Ricky!) My son came back to basketball this winter after deciding (on his own) to take a year off. He randomly ended up on this team that had a few very good players on it, but several others were average, or below-average players. Some were even first-time basketball players! But they still won the championship in a fairly competitive bracket. The biggest reason is because this wonderful man inspired this group of boys to greatness, not just on the field, but in life. He taught them sportsmanship by modeling sportsmanship himself. He pointed out all the things the individual boys were doing well. He told them how much he enjoyed watching them play. Every single game. He pushed the good players to play better, and he encouraged the less-skilled players to work hard to get better. He was competitive and driven, but he inspired hard work in those boys. In fact, he nick-named the team “Hard Work.” So throughout the season, when we cheered for the boys, we said “Go, Hard Work!” When they messed up, he talked to them about it, but far more often, he pointed out what each boy did well. And his spirit, attitude and energy were never frenetic or anxious. He was poised, relaxed and confident. And it rubbed off on his team. I have never seen my son work so hard and practice off the court and commit to getting better at anything than he did this winter in basketball. And we continue to talk about how “hard work” pays off in many situations that we encounter in life. What wonderful life lessons.

A question that American Academy of Pediatrics asks us is to consider what the goal is of the athlete. Very interesting, especially considering the AAP states that only between 0.2-0.5% of high school athletes ever make it to the professional levels of any sport. The AAP says that “the ultimate goal of youth participation in sports should be to promote lifelong physical activity, recreation, and skills of healthy competition that can be used in all facets of future endeavors. Education of parents, athletes, and coaches must be part of the plan to promote fun, skill development, and success for each individual athlete. Skilled young athletes must be mentored carefully to prevent over-participation, which may affect them physically as well as psychologically…Ultimately, it is important for the practitioner to discuss the underlying motivation for sport participation with the athlete, the parent, and, possibly, the coach. Unfortunately, too often the goal is skewed toward adult (parent/coach) goals either implicitly or explicitly. The parent often hopes the child will get a scholarship, become a professional athlete, or fulfill the parents’ unfulfilled childhood dreams. It is best to identify and focus on the child’s motivation and goals to provide guidance.”

These are clear and concise words from the AAP. I could not have said it better myself.

How are you working to inspire greatness in your young athlete?