The Secret to Ending a Power Struggle 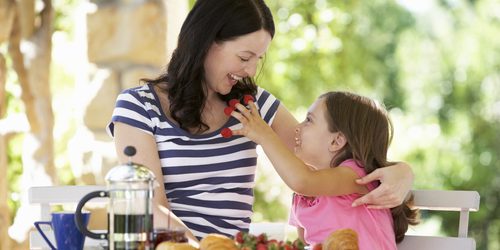 How many times do we find ourselves in a power struggle with our kids? What can we do to end them? I was thinking about a client I coached once who had an ongoing battle with her daughter about food that was causing both of them a great deal of stress, not to mention the strain it was putting on their relationship. She felt that her preschool daughter had a horrible diet and ate too much junk food. As a result, she monitored every bite the child put in her mouth and feared her daughter might begin to sneak or hoard food, gain too much weight, or develop some sort of disease.

This mom’s behavior was rooted in, and driven by fear.

As we progressed in coaching, I discovered that this mom was very health-conscious and weight-conscious. She was overweight as a child but was now normal-weight after a lot of effort and several changes in her lifestyle and habits. To an outside observer, her daughter appeared to be healthy – vibrant, curious, energetic – no more driven by junk food than most other kids. But to this mom, her daughter seemed to be overly motivated by and focused on food. This was a distinct source of tension between them. She admitted that mealtimes had gotten so bad in her house that she had resorted to coaxing her daughter to eat “one more bite of broccoli” in exchange for dessert or some other type of treat. And then her daughter, sensing her mom’s hyper-focus on her plate, would use food as a bargaining chip.

This mom was creating the very thing that she feared most – a child who was overly focused on junk food.

How could I help this mom end her power struggle with her daughter?

[bctt tweet=”Breathe through when your fear is rising, refuse to step in, and end the power struggle.” username=”erintaylor_ma”]

I as I learned from my friend and mentor Dr. Shefali, author of The Conscious Parent, we put the stress and worry about her daughter on the shelf for the time being and instead focused on this mother’s relationship with food and health growing up. During our work together, she was able to more clearly see the direct relationship between her own struggles with food and her current power struggle with her daughter. By keeping her awareness on this relationship and learning how to breathe through when her fear was rising and she wanted to step in and control her daughter, she was able to completely turn this situation around and end the power struggle.

By the time our coaching came to and end, mealtimes were pleasant events in their home. They would sit together at the table and this mom would put several choices out, trying to make sure at least one item was something she knew her daughter would eat and one thing she hoped she would eat or at least try. She learned how to keep her focus on enjoying the time with her daughter and conversing about how their days went and not on the amount of types of food consumed. Her daughter had the choice of what and how much to eat and her mom discontinued commenting on what she saw on her daughter’s plate. Her daughter continued to make fairly good food choices, is still a healthy weight and now loves mealtime with her mom.

What could be better?