The Children are our Future 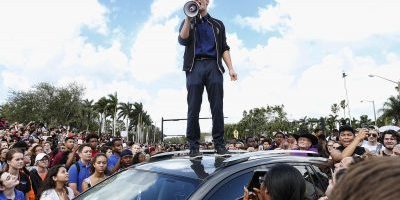 I believe the children are our future

Teach them well and let them lead the way.

Whitney Houston sang that to us in 1985, and those words are so prophetic today. I have spent the past ten days reading about the outspoken, courageous, determined teenagers from Marjory Stoneman Douglas high school.  These young people have marched to the Florida Legislature in Tallahassee, sat down with our President, participated in a Town Hall with lawmakers, given countless interviews with all sorts of TV stations, news channels, newspapers, etc. They are articulate and comfortable in front of a camera.

Technology – it is helping or harming?

My colleague and I just spent 22 days offering a free summit on navigating technology in our families. There are so many very real concerns that parents have (as well as many over-hyped fears) about technology use among kids. But what I have witnessed this past week is an example of one of many silver linings in the technological world in which our children are growing up. These teens have YouTube channels, do live streams, and send videos to friends. They have literally grown up in front of a camera. And they learned at an early age to be comfortable using their voice. In a much more public way than their parents ever were.

I decided to research exactly who Marjory Stoneman Douglas (their school’s namesake) was. She was a journalist, author, women’s suffrage advocate and staunch conservationist of the Florida Everglades. Basically, she was an activist in every sense of the word. She was born in 1890 and lived for 108 years. Wikipedia said that she was asked to take a central role in the protection of the everglades when she was 79 years old and spent the remaining 29 years of her life (until age 108) working diligently to conserve that part of Florida.

Wikipedia also said “Despite Douglas’ demure appearance—she stood at 5 feet 2 inches (1.57 m) and weighed 100 pounds (45 kg), and was always immaculately dressed in pearls, a floppy straw hat and gloves—she had an uncanny ability to get her point across.”

As I read this, I couldn’t help but think of these teens from this high school. Eleven days ago they were “typical” teenagers, going to school each day and living their lives. But February 14 catapulted the survivors into energized, passionate activists. And they don’t appear to be resting until they accomplish their goals, just like Marjory Stoneman Douglas did. Marjory was a tiny person but had an “uncanny ability to get her point across” – again, just like these teens. How many of these young people know Marjory’s life story and how proud she would be of them today?

Whitney Houston was so right – our children ARE our future. I automatically started to write that they WILL be leaders who will carry us into the future. But I realized that is actually wrong – they ARE leaders now who are leading us into the future.

In my work I share my dear friend Dr. Shefali’s message that the exact children came into our lives to show us where it is we need to grow and that they raise us as much as we raise them. There is so much that we can learn from these young people. In our own lives, there is so much our own children can teach us – about life, love the pursuit of happiness.

Let these young people teach us – let them lead the way – we will all be better for it and for them.