To all parents of young athletes 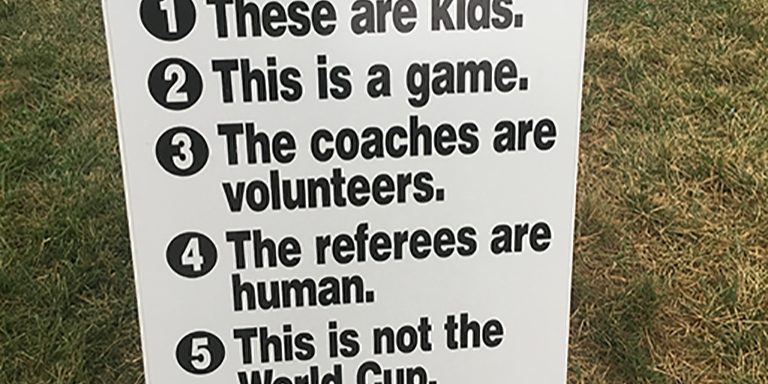 I was inspired to write this to all parents of young athletes after my son’s soccer tournament last weekend. There was one particular game that included a great deal of unsportsmanlike conduct from the other team’s players and parents.

As I watched the game and observed the behaviors, I was composing this blog in my mind. But it was filled with emotion. I was going to call out the name of the team that was acting up. I was going to call out the parents who carried on in such a distasteful way. But thankfully I decided to wait a few days to allow my emotions to settle before I wrote. And that is a great practice for most things in life that upset us, isn’t it?

So this blog will look vastly different than the one I had originally composed in my mind. What I have found is that it is not productive to directly confront people who act in this way. My hope is that I will plant a seed in the minds of parents of young athletes everywhere. You can agree or disagree with me, but at least I hope to get you thinking about it.

When parents of athletes ruin the sport

After the game, my son was quite upset. He has been playing soccer for six years and thankfully, he had never witnessed this kind of behavior before. That in itself is amazing. The others players were pushing and the ref wasn’t seeing it because it was happening away from the ball. Because he was paying attention to the action, he did not catch most of the pushing. The other parents were screaming at the ref, screaming at their own young athletes and screaming about our boys’ play. And saddest of all, a few of the other players were yelling at the ref just like their parents. And these boys are only ten years old. Ten years old! My son didn’t even know people were capable of acting like that in a soccer game.

Why standards and expectations are important

I coached soccer at (rec and travel) for seven years before “retiring”.  As a result, I have been involved with our travel soccer league for almost a decade. Over that time, the league has implemented strict standards of conduct for players, coaches and parents of the athletes. This other team came from about an hour away and they are not in our soccer league. I was quite pleased when I found that out to note that the changes our league has made seem to be paying off. In the few years and the many teams my son has played in this league, he has not witnessed any of this kind of behavior. That’s a pretty good sign, at least for our league.

I’ve been asking myself this question for decades. Why were those parents screaming at the ref? Why were they screaming at the kids? It creates a toxic environment for the players, the fans and everyone else. I think those parents actually have the best intentions for their kids; they want them to win. And winning on the soccer field in their minds probably equals winning in life. But that isn’t always true.

The amazing opportunities in sports for our athletes

Sports provide our kids a priceless opportunity to learn valuable life lessons like working hard, overcoming obstacles, feeling confident, committing to what we want, trying our hardest, accepting defeat with grace, not rubbing it in the loser’s face, etc.

When we teach our children to take down the other team in order to win, that is not a valuable life lesson.

Let’s instead teach them to work hard and play their best regardless of the outcome of the game.

When we teach our children to rail against authority (the ref) in a loud and vocal way, that is not a valuable life lesson.

Let’s instead respect the fact that the ref is the authority in the game. They are only human and will make the best calls they are capable of.

When we berate our children after the game for not playing to our expectations of them (that happened in this game too) that is not a valuable life lesson.

Let’s instead tell our children, as my friend John O’Sullivan says, how much we enjoy watching them play, ask them if they tried their best and if they had fun in the game. John discovered that kids dislike the ride home with their parents the most of anything related to playing sports.

There is enough anger, hostility, aggression and fear in this world. We don’t need to instill any more in our children. Our children are in fact inheriting a world that they will need to work hard to course-correct, if we don’t do it first. This is not to say that we cannot teach them to work hard, try their best and have a strong desire to win. But those things should never be accomplished by tearing down someone else.

If you would like to explore this topic more, I invite you to listen to our latest episode of the Maximizing Life in the Middle Podcast.

Navigating Technology in our Families: An Excerpt with Dr. Siegel
January 9, 2018

Boundaries: When are they negotiable?
August 1, 2017