I’m baaaaack! And a special offer….

After a brief writing hiatus, I have returned to my roots, sharing my ideas with you and learning and growing together. I wanted to relaunch my blog with a story AND a special offer (keep reading)!

A few weeks ago, my now 12-year-old daughter begged me for “fake” nails. I tried them when I was younger and decided I don’t like them.

I don’t like the way they make my fingers feel, and it feels as if I have reduced use of my hands when wearing gel nails. So that is my back story and my history with them. Enter my daughter, who was desperately begging me for “fake” nails.

I have noticed recently that my once-always-agreeable daughter has suddenly, as she has hit puberty, found her voice. For her long-term development, this is fabulous news! I don’t want her to ever be a doormat who allows people to walk all over her. But as her parent, it takes some adjustment on my part to this new phase she has entered. And it has taken me a few months to even become aware of what is shifting and then to begin to adjust to this new “her.” But with practice, I am adjusting more and more quickly. It is still not totally smooth, but things are getting better every day.

When my daughter first asked me if she could get gel nails put on one Saturday, my immediate, knee-jerk response was “no way!” When she asked why, I explained that gel nails are annoying, you cannot use your hands that well with them on and I cannot stand them. Deflated, she slumped in her chair and said “But that is how you feel about them, Mommy. That’s not how I feel. I really like them and I really want to try them.”

Noticing her body language and really “hearing” her words, I realized that I was in one of those shifting moments when it is time for me to adjust to the new “her.”

So I spun on my heels and told her that I had changed my mind. I told her that she was 100% correct – I cannot expect her to dislike gel nails just because I do and that if she wanted to try them, I would support her. Overjoyed, she jumped up and hugged me.

Later that day, we went to the nail salon. It was very crowded and we had to wait a while for her turn. Between the wait and the time it took to put the nails on, we were there two hours! We were both quite tired afterwards, but she was delighted and could not stop looking at her nails. That was the day before Easter. The next day, she proudly showed her nails to all of our family members who arrived to celebrate the holiday.

Throughout the week, my unconsciousness surfaced a few more times. Whenever the nails would get in the way of her doing something (opening a can, picking up a penny) I would readily point out that the nails were interfering with her ability to live her life. After a few of these comments, she came to me and asked me to please stop saying these kinds of things. She told me that she really liked them and it did not bother her that much that the nails made certain things more difficult, but what was more difficult for her was listening to me constantly pointing out WHY she should feel the same way about the nails as I do. Again, she was 100% correct and she showed me yet again where it is I needed to grow. From that point forward, I refrained from making negative, judgmental comments and the week proceeded peacefully. It was a full week before she went back to school. When I dropped her off the first day back, she wondered out loud what the kids at school would think of her nails. When she came home that first day, I asked her what the kids thought about her new nails. She said no one even noticed!

The next day, I noticed that one of her nails had fallen off. The day after that, three of them were off and by the next morning, they were all off. When I asked her what happened to her nails, she said she took them off because they were falling off anyway. I asked her if she wanted to get new nails put on and she said she might want to do it for special occasions like proms and such, but not for everyday life. And we haven’t spoken of it since.

Looking back, I realized that I think part of her desire for the fake nails was to look like many of the other girls in her school who have them (she had shown me many pictures on social media of girls and their nails). Once she realized it wasn’t getting her the “social capital” she was hoping for, having them on became less and less important to her.

Frequently, I help parents in my coaching practice to adjust to their ever-changing children, especially when they enter puberty. This situation was a chance for me to take a little of my own guidance.

And now, for my special Mother’s Day offer!

From now until 11:59pm on Thursday, May 11, you can get your copy of my eBook, Connection and Kindness: The Key to Changing the World Through Parenting for ONLY 99 CENTS!

This makes a great gift if you are a mother, have a mother or know a mother. It is my mission to spread this conscious parenting message far and wide and your purchase helps me to do just that. Thank you in advance! 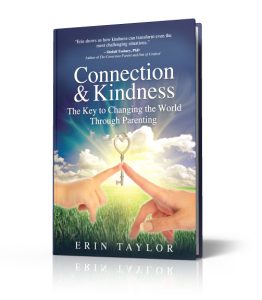