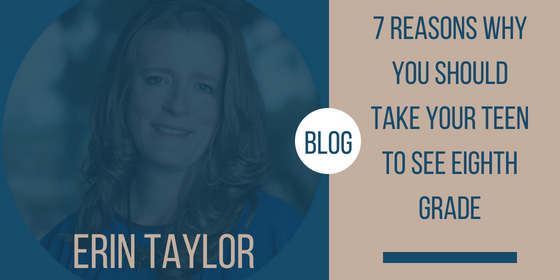 This past week, both of my sons had plans with their friends. I took this beautiful opportunity to take my 13-year-old daughter to see the movie Eighth Grade. This is a film all about the awkwardness of middle school and the common challenges that kids in middle school face.

The movie is rated R, which is interesting for a movie that is geared toward middle-school-aged kids. However, as I do with all media, I checked out Common Sense Media’s review of it. I trust their reviews of media and have been relying on them for years through raising my children.

So off we went.

My daughter, having also read the review, was less enthusiastic than I was to see the movie, but she went along anyway. Fortunately, we had to drive to a theater pretty far away (since it wasn’t playing closer). As a result, she didn’t see anyone she knew, which was a relief to her. The theater it was playing in was pretty empty except for us and about ten other people, which was also a relief to her. 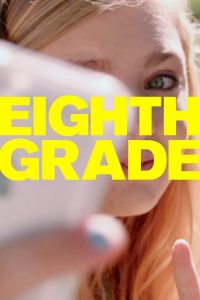 Here are 7 reasons why you should consider taking your 8th grader to see this movie.

The actress who played the main character Kayla did a fantastic job portraying the awkwardness that many kids feel in middle school. She had pimples on her face, was slightly overweight, and really shy around her peers.

What Middle Schoolers are Really like under their bravado

But she was a deep thinker. In fact, she had a YouTube channel where she made short videos of wisdom to help other kids navigate the challenges that come along in middle school. I loved the messages and the insights that she shared, and I found myself amazed that her character was comfortable keeping this channel going. But she did. Until she found herself in a really awkward situation that she did not know how to handle, and then she decided to quit making videos. Until an equally-awkward boy she met told her how much he loved and learned from her videos.

At one point, she was invited to the “popular” girl’s party, basically during a painfully awkward scene outside of school where the girl’s mom called her from the pickup line after school and made her daughter invite her, though her daughter was literally rolling her eyes in the car. Kayla could tell the girl did not want her to come, but she ended up going after her dad encouraged (aka pressured) her to go.

And the party was just as awkward as you would think. The other girls all had bikinis and developed bodies. Kayla had a one-piece and was not as developed. The other girls were flirting with the boys. Kayla had no one to really talk to. It was interesting to watch her navigate this situation all alone.

When someone “makes the moves” on you

There was another time where she found herself in a car with an older boy who tried to convince her take her shirt off. I won’t spoil how she handled that situation, but the reality is that our kids can find themselves in these kinds of situations as they grow. And our connection to them to help them navigate these and many other things is vital. But how?

There was a scene where an 8th grade boy she liked asked her to send him nude photos of her. There was another scene where the teacher was talking about puberty to the class of boys AND girls, and a boy was accused of masturbating under his shirt during the presentation. As cringeworthy as these things are, they are realistic and great conversation-starters with our tweens and teens. And throughout the movie, it is clear how connected to her phone Kayla is. But it is also clear how much that connection causes her increased anxiety. Especially because her dad finds it difficult to connect with her to help her with these various situations.

I am not sure if I would have taken my daughter if she was younger than 8th grade. But you would have to decide based on your own particular child whether they could handle it. And because the main character is a girl, the movie is shown through the eyes and experiences of a girl. This is another consideration for you.

A dad finding his way and a girl letting him in

One of the most painful things in this movie for me to watch was how disconnected Kayla was from her dad. Despite how desperately he tried to connect to her. Her mom left when she was a little baby and her dad raised her since then. You can tell how much he loves her and is concerned about her. And despite repeated attempts to connect with and support her, she just keeps shutting him out. It was painful because I work with so many parents who find themselves in the same situation. They love their child so much and want to connect and support them, but they just don’t know how.

This is one of the parts I love most about my job; when I can help a parent make a deep, loving connection to their child. There is nothing better, really. For the child or the parent or the world at large. The ripple effect of that loving connection spreads out far and wide.

At the end of the movie, there is a scene where the dad is finally able to get through Kayla’s teen angst, worry and anxiety and make that loving connection to her. At once she understands that her dad truly does see her, love her and understand her. And that is the most beautiful scene in the movie.

Have you had conversations with your middle-schooler about these types of issues?

Sitting in the Discomfort and Trusting Our Kids
May 21, 2017